Its narrative is a multi-generational story about "two families whose trajectories collide in the Arizona desert in 1998." In 1998, the Walker family—Vince, his wife Michelle, six-year-old daughter Zoe, and father Jim—are relocating to St. On their way through Two Rock, Arizona they are involved in a car accident with the Holt brothers, Tyler, Dale, and Jay, and their car is left immobile. Based on choices made, the police are alerted in different ways and surround the Desert Dream. Various flashbacks reveal that the Walker marriage is struggling. Despite having warned the owners of the fault, Vince is under pressure to take the blame in exchange for money. The brothers robbed the Sheriff to pay off his debts and remove the threat to their lives from his debtors. Jay either prevents Bear killing himself for the insurance money or lets him die. The Holt's mother Sharon talks her way into the building by convincing the police she will convince the brothers to surrender. Romero makes contact with Vince and encourages him to locate a black book unwittingly stolen by the brothers. Romero is adamant that the money belongs to dangerous people and he needs the book back, launching two futile assaults that get several officers shot and killed. Finally ramming a school bus through the front door of the motel, the bus is set on fire and explodes and the surviving Holts flee with a hostage, Vince or Zoe. Dale is shot and killed, and depending on decisions made, Michelle, Joyce, and Vince can also die. 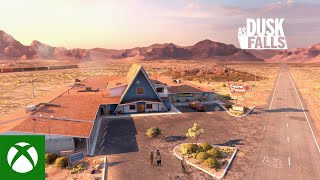 User Posts For: As Dusk Falls