Atelier Ryza 3: Alchemist Of The End & The Secret Key

Backlog
This latest installment picks up roughly a year after the conclusion of Atelier Ryza 2's storyline. After the sudden appearance of a mysterious group of islands just off the coast of their home on Kurken Island, Ryza and her companions are compelled to embark on a brand new journey of discovery. After it is discovered that this unknown part of Mainland Kark is having a negative impact on Kurken Island, Ryza and the rest of the crew decide to travel there in order to investigate. Upon their arrival, they find a mysterious and enormous gate. When they get closer to it in order to find out more, Ryza begins to hear a mysterious voice in her head that is attempting to guide her to the "Code of the Universe." The characters embark on an epic journey revolving around keys and the origins of alchemy in the hopes of finding a solution that will allow them to save their island.
First Release February 24, 2023
Next Release February 24, 2023
Posts Ratings Similar List ⋮ 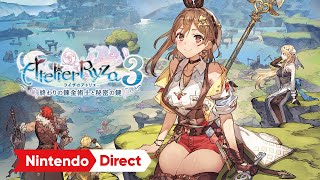 User Posts For: Atelier Ryza 3: Alchemist of the End & the Secret Key