Brothers - A Tale Of Two Sons

It sold more than 800,000 copies as of January 2015. Brothers: A Tale of Two Sons is presented from a third-person view overlooking the two brothers. The controller triggers cause the respective brother to interact with the game world, such as talking to a non-player character or grabbing onto a ledge or object. The older brother is the stronger of the two and can pull levers or boost his younger brother to higher spaces, while the younger one can pass between narrow bars. The player progresses by manipulating the two brothers at the same time to complete various puzzles, often requiring the player to manipulate both brothers to perform differing functions . All of the in-game dialogue is spoken in a fictional language based on Lebanese Arabic, thus the story is conveyed through actions, gestures and expressions. The story begins with a boy named Naiee standing at the tombstone of his dead mother, who drowned at sea while he was unable to save her. His older brother, Naia, calls him to help their ill father reach the village's doctor, who in turn tells them the only way to save him is by collecting the water from the Tree of Life. The brothers embark on their journey through the village, hills and mountains, while facing challenges like the local bully, a farmer's aggressive dog, and deadly wolves. The girl assists them on their journey, and begins seducing Naia, tricking the brothers to enter a cave, much to Naiee's dismay. Nearing the end of their journey, the brothers reach the Tree of Life; Naia insists that Naiee venture on to reach the top of the tree. Unable to revive him using the water, Naiee buries and grieves for his older brother before returning to the village. Upon reaching the shoreline, Naiee must face his inability to swim in order to get the waters to his dying father. 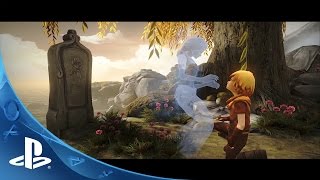 User Posts For: Brothers - A Tale of Two Sons