As part of the Conker video game series, the game follows the story of Conker the Squirrel, a greedy, heavy-drinKing red squirrel who attempts to return home to his girlfriend Berri. Although visually similar to Rare's family-oriented Nintendo 64 platform games Banjo-Kazooie and Donkey Kong 64, Conker's Bad Fur Day was designed for mature audiences and features cartoon violence, alcohol and tobacco use, profanity, vulgar humor and pop culture references. The game sold well below expectations due to limited advertising and a release towards the end of the Nintendo 64's life cycle, but has since earned a cult following due to its unique styling. Conker's Bad Fur Day is an action-platform game where the player controls Conker the Squirrel through a series of three-dimensional levels. The game features an overworld where players can transition from one level to another, although many are initially blocked off until Conker earns a certain amount of cash. Each level is an enclosed area in which the player can freely explore to find tasks to do. He can swim underwater for a while until he runs out of breath, climb ladders or ropes, and is strong enough to push heavy objects. To regain lost health, Conker can eat pieces of "anti-gravity" Chocolate that are scattered throughout the levels. Additionally, the game employs "context sensitive" pads that allow Conker to gain different, temporary abilities when pressing the "B" button atop them. For instance, in the beginning of the game, by pressing the B button on the first pad he encounters, Conker drinks some Alka-Seltzer to wipe out his hangover, at which point players can proceed forward. In the final chapter of the game, Conker and Berri are enlisted by Don Weaso, head of the Weasel Mafia, to rob a bank. After entering the vault, they find that the bank scene was an elaborate trap set by the King and Don Weaso to capture Conker. In the ensuing confrontation, Berri steps in to handle the confrontation for Conker, but is gunned down by Weaso under orders by the Panther King. 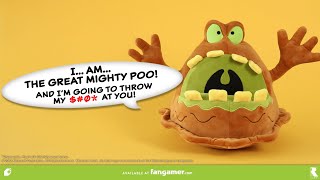