Backlog
Everybody's Golf , known in Japan as Minna no Golf and formerly known in North America as Hot Shots Golf, is a series of golf games published by Sony for the PlayStation series of video game consoles.
Posts Ratings Similar List ⋮

Everybody's Golf , known in Japan as Minna no Golf and formerly known in North America as Hot Shots Golf, is a series of golf games published by Sony for the PlayStation series of video game consoles. The series has a humorous take on the game of golf which includes cartoon-like characters and with modes such as miniature golf paired with a realistic engine and precise ball physics. Seven main games in the series have been published between 1997 and 2017 for every home console in PlayStation brand, with another four spin-off editions for PlayStation Portable and PlayStation Vita platforms. As of March 2017, the series has sold more than 14 million copies worldwide. There are a variety of modes including Tournament, Training, Stroke Play, Match Play, and a Miniature Golf course. The game featured six different courses and a free moving game camera. While the game is very similar to the original, it does bring slight improvements. The character models themselves are more realistic looking as opposed to the big-headed anime style of the original. Again, there are several different modes of play, from standards like Stroke, Match, and Tournament play, to the versus, through which new characters can be unlocked. Gameplay itself is a version of the standard '3 click' variety used by the majority of golf games. This is the first game in the series to include guest characters from other games. They only appeared in the American and European versions. The overall look and feel of the game is pretty much the same as its predecessors, though refined visuals are a given. The developers also increased the overall number of characters from 15 to 24, added more caddies and boosted the number of courses from 6 to 15. Jak, from the Jak and Daxter series, is a playable character, while Daxter is a caddie. The game was titled Hot Shots Golf Fore! in North America. The game features three modes. 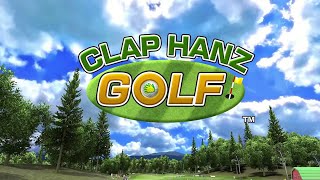