1
Backlog
Players who pre-ordered the ultimate edition, however, received 4 days of early access and were able to play the game from the 27th of September.Kylian Mbappé is the cover athlete for the second consecutive year.
First Release September 27, 2021
Last Release October 1, 2021
Posts Ratings Similar List ⋮

Players who pre-ordered the ultimate edition, however, received 4 days of early access and were able to play the game from the 27th of September.Kylian Mbappé is the cover athlete for the second consecutive year. FIFA 22 introduces "HyperMotion Technology,” which uses motion capture data collected from 22 real-life players playing a complete, high-intensity football match in motion capture suits. This "HyperMotion" feature is only available on the 9th Generation and Stadia versions of the game, and has given rise to the slogan "Powered By Football." A single player “career mode” is featured in FIFA 22, where the user can play as a player or manager throughout a 25-year career.FIFA 22 introduces a create-a-club option in manager career, allowing players to design a new club with customized kits, crest, and home stadium. Career mode introduces a level feature where users can advance their player by collecting experience points that unlock player skills and “perks” to improve stats. FIFA 22 Ultimate Team is a game mode where users can create a team and play online or offline games to earn various cards like “FUT Heroes” to add to their team.FIFA 22 Ultimate Team introduced "FUT Heroes" cards that represent different players with special ratings and attributes. Players have the option to preview Silver and Gold player packs as in the previous game, by allowing players to preview what they would receive from a pack before deciding whether to purchase it. "Icon" cards are classified as extremely rare, the probability of getting one from a player pack is below 1%. New VOLTA mechanics in FIFA 22 will allow players to trigger special abilities during a match that would boost a player's avatar in a specific attribute. Players of FIFA 22 will also have the opportunity to play with up to three players in various online mini game modes, which will be part of the new VOLTA Arcade. Pro Clubs is a game mode where players are able to create their own virtual character to take part in 11v11 online matches. Players also have the ability to change a variety of features about their team, such as the team’s crest, kits, and the stadium appearance. Traits are qualities a player possesses that affect their behaviors in-game. The Standard traits influence the user’s and CPU’s control over the player, these traits consist of different kinds of shots, throw-ins, passing skills, dribbling skills, and player health. For the first time, the Indian Super League and its eleven teams were added, as well as the UEFA Europa Conference League, the third tier of European club football established in 2021. Juventus, Roma, Atalanta and Lazio are not featured in FIFA 22, and are instead known as Piemonte Calcio, Roma FC, Bergamo Calcio and Latium respectively. Bayern Munich and Barcelona are also featured in the game with licensed players and kits, but do not have their stadium licenses and thus play in generic stadiums. Following a November 2020 announcement by Canadian actor Ryan Reynolds and American actor Rob McElhenney, through the RR McReynolds Company LLC, that they would be taking over the club,Wrexham A.F.C. were included as part of the "Rest of World" section, becoming the first non-league team to be featured in the series. Wrexham's last appearance in the FIFA series was in FIFA 08, when they were relegated from League 2 to the National League. In February 2022, EA Sports announced that the teams from the Russian Premier League and the Russia national football team will be removed from FIFA 22, FIFA Online and FIFA Mobile amidst the country's invasion of Ukraine. 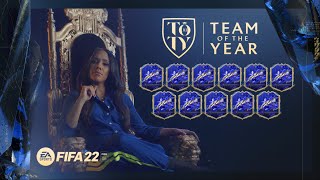