The game was successfully crowdfunded on Kickstarter on October 24, 2017 raising over $63,000. Players take control of a young boy named Flynn and, accompanied by Dex, a giant mythical dog companion, they embark on a journey of discovery and conflict as they learn to master the art of Crimson Energy. Flynn and Dex must save Rosantica before the evil from The Scourge claims his home. The game tells its story through NPC dialogue and short, comic-like images, the latter being more involved with the main story elements involving Dex. NPCs throughout the game offer hints about Flynn’s past and occasionally give players small tasks in exchange for gems or keys, which unlock challenge levels located in each region of the game map. During the first scenes of the game, Flynn is taking a nap outside his home on Cardinal Island, a quaint, somewhat isolated part of the mainland, Rosantica. During this time, Flynn and Dex take another nap after meeting with a second helping of mainline NPCs . Soon after a small amount of progression through Cardinal Island, the player is met with the game’s main rival-antagonist, Rozia. Yombal, the relic collector, can also be interacted with to sell any found relics for 1,000 gems. Flynn: Son of Crimson features fast-paced combat with a wealth of hard-hitting attack combos. Mini-bosses and tougher enemies soon enter the stage in the form of environment-specific knights and Scourge knights. Dealing with some enemies in Flynn: Son of Crimson can be as simple as dodge-rolling at the right moment to avoid incoming attacks, then dealing damage from behind or by using more advanced techniques, such as freezing them in place or instantly stunning them with electric magic. A stun-meter is introduced early in the game and is used throughout that allows players to build up a yellow gauge above the enemy until it becomes stunned for a few seconds - this allows for multiple safe attacks without retaliation. As well as close range melee combat, players are introduced to ranged magic fireballs very early on which can provide an alternate way to defeat some enemies at a safe distance. Flynn eventually gains access to a charged version of ranged magic, with players holding the button to charge up a more powerful shot, releasing it at an opportune moment. Charged magic is also upgraded with elemental effects such as ice, electric and fire. Developed by Studio Thunderhorse over the span of 5 years, Flynn: Son of Crimson began to take form in late 2016. 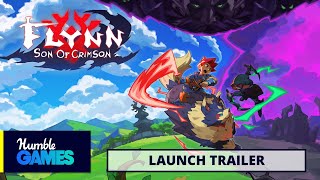