Backlog
Ubisoft described it as one of the biggest open world games that they have published, with the game world including a wide variety of environments such as mountains, forests, deserts, and salt flats.
Posts Ratings Similar List ⋮

Ubisoft described it as one of the biggest open world games that they have published, with the game world including a wide variety of environments such as mountains, forests, deserts, and salt flats. Tom Clancy's Ghost Recon Wildlands received generally mixed to positive reviews from critics. Players play as members of the Delta Company, First Battalion, 5th Special Forces Group, also known as "Ghosts", a fictional elite special operations unit of the United States Army under the Joint Special Operations Command. It does not feature the futuristic setting used in Advanced Warfighter and Future Soldier, but instead adopts a modern-day setting, similar to the original Tom Clancy's Ghost Recon. As a result, the equipment featured in the game is based on weapons and gear commonly used by military forces around the world. The game is the first entry to feature an open world environment, which consists of nine different types of terrain, such as: mountains, forests, desert, salt flats, and also introduces a dynamic weather system as well as a day-night cycle. According to the creative director of the game, the AI of the game is unscripted and has their "own motivations and agendas". Each of the 21 areas on the map is controlled by a buchon, who is also associated with one of four divisions of the cartel's operations: Influence, Security, Production and Smuggling. Eliminating enough buchones in an operations division allows players to target that division's underboss, and eliminating that underboss and all of the buchones in an operations division leaves the division head vulnerable. Capturing this division head cripples and destabilizes the division and makes the cartel boss more vulnerable. It features cooperative multiplayer mode, in which players can be joined by up to three other players to explore the game's world and to complete campaign missions. The game can also be played solo, in which the player will be accompanied by three AI teammates, which the player can give orders to, if a player wants a more "lone wolf" playstyle they can be disabled via the settings. The country has become increasingly unstable as a Mexican drug cartel known as the Santa Blanca Cartel gains control of several regions through the country. 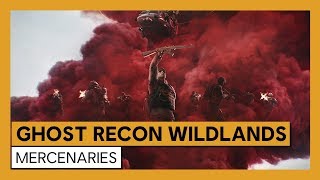