Hakoniwa Company Works is a tactical role-playing game with elements of a sandbox game developed and published by Nippon Ichi Software. The theme song of the game is called "Hakoniwa Ambition" and is performed by Kaoru Hayano. The protagonist becomes the leader of a company that connects the islands and takes on requests. The protagonist is supported by Meme Kazamidori, a cheerful girl who used to work for a famous company. Players are able to power-up their characters by crafting and placing objects in the house the specific character lives in. The Bowler job specializes in map damage. The Carry job focuses on gathering materials. Skills can give players small advantages, for example by breaking blocks on the map or providing buffs. Originally teased on March 26, 2017 through a 50-second video on Nippon Ichi Software's YouTube channel, the game was fully revealed as Hakoniwa Company Works in the following issue of Dengeki PlayStation. Upon reveal, many fans made the comparison with Minecraft because of the voxel-based art style and the crafting gameplay shown in the teaser video. 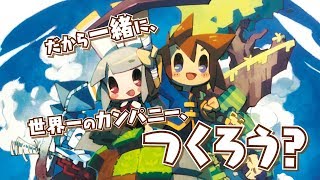