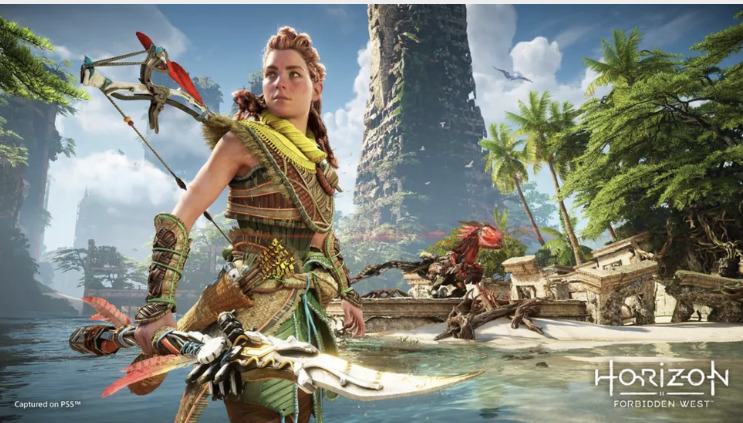 Step aside Laura Croft, there is a new sheriff in town. Aloy in Horizon Forbidden West has taken the seat as the new female game character when it comes to capitalizing on fighting, endurance, agility, no fear, and strength. Oh man Where do I start with this one? What a instant classic already on PlayStation. I could leave it at that. This will be a easy review. It has lived up to the hype Horizon fans. It was well worth the wait to stay up until midnight on the East Coast to buy this game for myself when it was launched. I was fighting to stay awake. But After the 70 GB download was done. I couldn’t put the game down then, and the next. I feel like I have played more then enough to give the most honest feedback to those who are waiting a little while longer. From California to Utah. It has one of the most beautiful views in the world today. Its the year 3042 and this beautiful region that we know today in 2022 has been destroyed by machines. Even after all that has taken place. This region looks more stunning then it does today.

PLOT- Horizon Forbidden West takes place months after Aloy thought her job was done. But that wasnt the case after the last cutscene in Horizon Zero Dawn where Sylens captured the enemy. Which left us with one of the biggest cliffhangers anyone has seen in a game. Traveling West. Aloy ran into a familiar friend named Varl. The game leads the player into a mini tutorial. It’s very similar, if not identical to 2017’s Horizon Zero Dawns controls. Only with a few new additions to help Aloy get around much easier. Then after a warm up, and a few fights, and what feels like your playing a linear style game. It quickly throws you into the open world of Horizon Forbidden West.

GRAPHICS AND GAMEPLAY- This game passes any other game I have played on PlayStation. I had RDR 2, Last of us 2, Uncharted 4 as some of my favorite games when it comes to graphics. But honestly Horizon Forbidden West steps it up to level 14 in my opinion. I played this on the base PS4 and the graphics on last gen consoles are really really good! The lighting, the water, the way the vegetation blows in the wind. It’s just beautiful. It’s not the vegetation where it looks like a green blob. The attention to details is mind blowing. The HDR option brings it to life even more if you have the option on your TV.

The new feature that was added is the underwater swimming to look for treasure or loot from the ruins below the water. The underwater exploration looks just as good as it does on land. The machines under the water that you battle just adds to the graphics. The acting from the characters are just as good as Horizon Zero Dawns acting in the cutscenes. As good as Horizon Zero Dawn looked. Guerrilla Games definitely turned it up a notch. It’s 2017’s release up a level. With the deserts, snowy plains, and tropical environments really add to the visuals and character to the game that separates itself from other open world games. There are different regions to explore throughout the game. I love how we get to see some iconic landmarks as well on Aloys Journey from California, Utah, to Nevada. You see the Golden Gate Bridge, Yosemite Valley, and much more landmarks that we see today.

The gameplay is smooth. The combat is very much the same as Horizon Zero Dawn. Shoot arrows, a few hits, dodge, and repeat. But still the same preparations will be needed. Some enemies will be easier to fight with fire arrows or cryo arrows. Trap certain machines with roam caster, or take down your enemies with the trip caster. It’s totally up to you!! There are a ton of new weapons to use as well. If your a sharp shooter, or if your feeling like Legolas in The lord of the rings. Go in with a bow. Same crafting mechanics exist in Horizon Forbidden West. Craft arrows, make bombs and traps. All this is very much the same and feels the same, other then a few new looks to the visuals with the Hud.

More freedom with the climbing. Not as free as Zelda Breath Of The Wild. The climbing feels a little bit on the arcade side. But it’s very easy to ignore. It’s not as smooth as Uncharted. But the strength in Horizon Forbidden West lies within its story and the combat.

The gameplay gets a little frustrating going through the weapon wheel and the D-pad buttons while trying to select the items located on the D-pad buttons. But you can adjust to the controls with patience and more time with the game. If your a experienced player with Horizon, then after a few battles, it will come back to you. If this is your first Horizon game. It may be a bit overwhelming at times. But still fun to play once you grasp the RPG part of the game, along with the crafting, and learning how to use each weapon correctly, at the right times. I love addition of new weapons with new new trap mines and spears. A few new ways to help you travel and explore easier with the addition of a glider that feels and looks and feels like the glider in Zelda Breath Of The Wild. A cool addition of what is called the pull caster. Where you can pull object off of ledges that may be out of your reach. Or to pull off covers to create something to grab on to climb. The glider is a very tool to use in combat. At times you feel unstoppable like a futuristic smoother version of Rambo. The new look to the skill tree gives you more options to choose from.

Building your XP in the game is important, due to the level each mission may throw at you. Your typical RPG style game. But Forbidden West is a lot like Dying Light 2 where the exploration may leave you sidetracked from staying focused on the main missions you are on track to do. So much to explore. A new view of the landscape, or a site you may want to explore that you have seen in your own life, and see how that landmark has held up over 1000 years. That’s what makes Horizon Forbidden West so unique and different from other games, is how the artwork is with the stuff we see in 2022 and how the characters look at 2022 being ancient.

A really unique and creative way to tell a story in a game. Guerrillas developers did well with making this game so unique and different. And very satisfying to play, along with the visuals. I will say the climbing and grappling in certain missions is way off. I had to spend an hour on certain ledges where you have to use your grappling hook. And it just would not work. Especially on the climbing in the main story mission called Deaths door where you have to climb your way to your destination. It was over and over of either Aloy not knowing how to use the grappling hook from one ledge to the next. Or her just flat out not wanting to use it. Sometimes you would jump at the perfect time, it would grab. Then the same technique, and fail to reach the ledge and end up at square one. I think it’s a problem that Guerrilla games need to address, or maybe we are stuck with this style gameplay. I don’t know. While I will admit that I am not the best gamer, but I have played hundreds of games. Probably thousands of hours or more on games. But I haven’t played a game where the climbing was this annoying and not enjoyable to play. Even after messing with the settings. I have spent time with games from Nintendo 64, I’ve been to the current GEN consoles. I have played some frustrating games as far as the gameplay goes. But this game has so much to offer with the story, the graphics, and the combat is some of the best combat I have played in any game. However, I found this part to be very very frustrating, and almost where I just wanted to put the controller down to the point I will come back later. So while the climbing, the grappling hook is way off from other games. It still pushes you to get through those annoying parts of the game, to complete the story. Because if you can get through issues like the climbing. Horizon Forbidden West will be probably the best game you played all year. Despite its failures to satisfy, and frustrate the player before they reach their destination after using the climbing mechanics and using the grappling hook. One good thing is there is a option to highlight the spots you can grab, And the certain routes you can take to climb to your destination. I found that very helpful and a cool feature they added to the game. But despite all that I just previously said. From the first mission called “reach for the stars” its a easy game to get hooked to. And very satisfying to play!

Except for a few hiccups here and there throughout my hours of play through. The game, at least on the PS4 runs really smooth. One time I went to go take a machine down with the silent strike, and noticed the spear not penetrating through the machine. With the spear 3 FT no where near the target. Once I grabbed hold of a block in the wall, and it came out as the game had it planned to do. But the object or stone was shaking violently up and down the wall. But with those small issues. That’s a easy patch. No crashing or nothing game breaking. The best running game I have played ever with the release not even being 24 hours old. It’s not a Assassins Creed Valhalla on release date. It’s no where near a Cyberpunk 2077  release. Those were unplayable at times.

FINAL THOUGHT- Horizon Forbidden West lives up to the hype. It is hands down the best game I have played in years. So many missions and activities to do. They are not repetitive at all. Each mission is a new experience to see. It was well worth the 60$ I spent. I can’t put this game down.

The graphics are so so good. Really helps you dive into the Forbidden West. Not near the end of the story. But I felt I played it enough to give it a 9.5 out of 10 without a doubt. I’m glad I was off work today. I have played it all day, and have enjoyed every minute. Feel free to comment if you have experienced anything that I haven’t covered, or maybe missed. Enjoy the Forbidden West. Rate how you feel this post affects Horizon Forbidden West to change it score. GameSense.co lets you change video game scores by reacting to how you feel posts affect a game.