1
Backlog
Taking place 30 years after the events of Killzone 3, Shadow Fall follows a new set of characters, putting players in the role of Lucas Kellan, a "Shadow Marshal", who is investigating a rising threat in the continuing war between Vekta and the Helghast.
First Release November 15, 2013
Last Release November 29, 2013
Posts Ratings Similar List ⋮

Taking place 30 years after the events of Killzone 3, Shadow Fall follows a new set of characters, putting players in the role of Lucas Kellan, a "Shadow Marshal", who is investigating a rising threat in the continuing war between Vekta and the Helghast. As the first game in the series made for Sony's next-gen console, Killzone Shadow Fall received a number of changes to the series formula. The game also introduced a new proprietary in-house game engine called Decima. The game received mixed reception overall; it received praise for its visuals and multiplayer modes, while criticism was directed towards the game's single-player mode and several gameplay features, although several critics appreciated the game's attempt to change direction from its predecessors, as well as its more open-ended level design. As of January 2014, the game has sold over 2.1 million copies, making it the first PlayStation 4 game to surpass the million copy mark and one of the best-selling PlayStation 4 games. Like its predecessors, Shadow Fall is a first-person shooter in a science fiction setting. Staple weapons such as the M82 Assault Rifle, stA-52 Assault Rifle, and stA-18 pistol return from the earlier Killzone games, albeit in new forms and variations. New weapons include the LSR44, a recoil-free, hybrid assault/charge sniper rifle that functions much like a miniaturized rail-gun, and the OWL, an advanced hovering attack drone that can attack/stun when it is adjacent to an adversary, as well as deploy an instant zip line, protect the player from enemy fire with an energy shield, and hack/scan terminals and enemy alarms to prevent reinforcements from arriving. While the previous games in the Killzone series portrayed a large war-zone with numerous allies by the players side at any given time and an overall linear design, Shadow Fall opts for a more open-ended level design and allows players to utilize stealth to approach their missions in addition to engaging in direct confrontations with enemies. Also in Shadow Fall, for the first half of the campaign, the player is alone in firefights, with the OWL as the player's only "companion", which is able to lay down cover fire, among other abilities. During the second half onward, the player is occasionally joined by Echo as an ally, where she is able to snipe enemies marked by the player. Multiplayer shipped with 10 maps. A massive security fortification called The Wall is constructed to separate the two civilizations from each other, due to the resentment they bear over the previous war. Both the Vektans and Helghast routinely perform covert operations against each other in the hope of finishing the war each claims the other started. The majority of the game takes place in Vekta City, home to the Vektan Security Agency headquarters, as well as a prison in New Helghan, and Helghan, the original homeworld of the Helghast, now dead and shattered due to the Petrusite detonation. The game begins in the year 2370, several years after the construction of "The Wall", during the forced relocation of Vektans out of New Helghan. 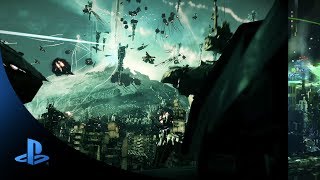