Several versions of the game are available for specific countries or regions, and each is published by various companies such as Nexon. In the game, players travel the "Maple World", defeating monsters and developing their characters' skills and abilities as is typical in role-playing games. Groups of players can band together in parties to hunt monsters and share rewards, and can also form guilds to interact more easily with each other. Players additionally have the option to visit the in-game "Cash Shop" to purchase a variety of character appearances or gameplay enhancements with real money. In July 2010, the Korean version of the game was completely revised in a patch named the "Big Bang". Later in the year, the Korean version received the Chaos update which introduced PvP and professions to the game. As of 2020, the game has reached over 180 million registered users worldwide and grossed over $3 billion in lifetime revenue. Players assume the roles of citizens in the Maple World with no specific objective to win the game, but to work on improving their characters' skill and status over time. The antagonist of the game, the Black Mage, was sealed away years ago by six heroes. However, the Black Wings were able to return the Black Mage to reality for a moment, causing a cataclysm known as the Big Bang. With the seal on the Black Mage weakening, the five heroes return to the world in a weakened state. The Black Mage then begins assimilating Grandis with the Maple World in order to rule both worlds. MapleStory is a 2D scrolling platform game. The controls for the game are executed using the keyboard and mouse. 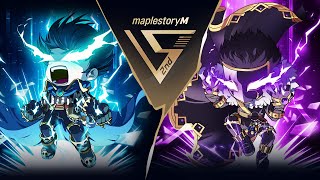