Based on the Marvel Comics character Miles Morales, it is inspired by both the character's decade-long comic book mythology and the 2018 animated film Spider-Man: Into the Spider-Verse—which helped popularize him. The game is a spin-off and successor to Marvel's Spider-Man , and the second installment in Insomniac's Spider-Man series. The narrative focuses on Miles' struggle to balance the duties of his civilian persona and his role as the second Spider-Man when his new home, Harlem, is threatened by a war between the Roxxon Energy Corporation and a high-tech criminal army called the Underground, led by the mysterious Tinkerer. Gameplay is presented from the third-person perspective with a primary focus on Miles' traversal and combat abilities. Outside the story, the player is able to complete side missions to unlock additional content and collectible items. It features the same open world, a fictionalized version of modern-day Manhattan, which is covered in snow because the game is set during the holidays. The new powers include Venom Blast, which allows the player to incapacitate enemies with bio-electricity, and charge or drain electronics; Camouflage, which gives Miles temporary invisibility; and Mega Venom Blast, consisting of a massive explosion of bio-electricity that damages all nearby enemies. The game introduces new gadgets, such as Remote Mines, which can attach to enemies or electrical panels; a device that summons holographic fighters to help in combat; and Gravity Wells that trap multiple enemies and make them easier to hit. Another feature that the game offers is Miles' Spider-Man app which gives him feedback on crimes happening in New York City and the location of these crimes. It informs the play of any side missions that are available for them to complete, which is beneficial to level up. Miles possesses a "spider sense", which warns the player of incoming attacks and allows them to dodge and retaliate, and web-shooters, which fire lines of webs that can be used during both traversal and combat, in several different ways. Miles has several unlockable suits, some of which are based on existing versions of the character in media, as well as original suits created for the game. 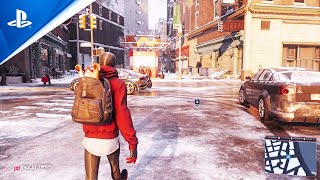 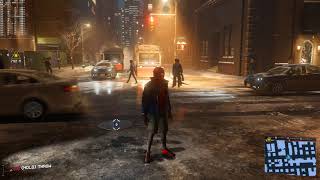