3
Backlog
Brooke Burke is the voice of Rachel Teller, the person who guides the player throughout the game.
First Release February 24, 2005
Last Release May 27, 2005
Posts Ratings Similar List ⋮

It is the eighth installment in the Need for Speed series and the direct sequel to Need for Speed: Underground. Brooke Burke is the voice of Rachel Teller, the person who guides the player throughout the game. The Nintendo DS port introduces a new feature in which the player can design custom decals to adorn any vehicle in the game. The game was followed by Need for Speed: Most Wanted in 2005, featuring a plot unrelated to the Underground games. The story begins after the player has beaten Eddie and his street gang, "The Eastsiders", along with Melissa in Olympic City and is now revered as the best street racer in Olympic City. After a race, the player is called by an unidentified man with an "invitation" to join his team and that he "is not taking no for an answer." The player ends the call without answering and starts driving to a party but is ambushed by a Hummer H2 that rams his Nissan Skyline GT-R, wrecking it. A man with a scythe tattoo on his hand calls to confirm that he "took care of a problem." Six months later, the player boards a plane to Bayview with a good luck note from Samantha that also refers to her friend, Rachel Teller. Caleb is revealed to be the driver of the Hummer that wrecked the player's car in Olympic City. Rachel reveals to the player that Caleb is attempting to take control of the racing scene in Bayview by manipulating the sponsorship deals in his favor, threatening the player's livelihood, and Rachel's liaison with the sponsors. Caleb attempts to have the player lose an Underground Racing League tournament by placing Nikki Morris, a Wraith member, in the same tournament as the player. Nikki warns them of the consequences of Caleb's plan if he takes over the city's street racing scene. Desperate to stop the player, Caleb eventually puts all of the remaining Wraiths members in an Underground Racing League tournament against the player, which fails and after losing another sponsor, Caleb challenges the player to a showdown. The player wins the race and celebrates with Rachel and Nikki while Caleb is left insolvent and defeated. That event solidifies the player's status as the best Underground racer in Bayview. Racing modes are roughly similar to Underground; one racing mode was dropped, this being the Knockout competitions. Yet, a Lap Knockout option is available when racing Circuit in non-career races. Unlike Underground, time plays a crucial role here, especially in parkade tracks; if the opponents end up crossing the finish line way before the player, a 30-second timer will start within which the players will have to accumulate drift points until the timer runs out or they cross the finish line. Apart from these, four new race variations have also been provided in Underground 2: The races are divided into 5 "stages". 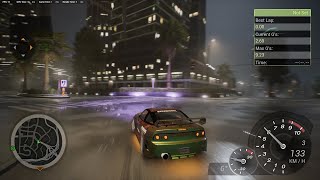 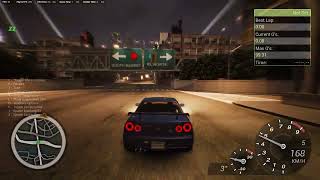