In the story, the player controls a hikikomori boy named Sunny and his dream world alter-ego Omori. They explore both the real world and a surreal dream world to overcome their fears and secrets. Prominently featuring concepts such as anxiety, depression and trauma, the game has psychological horror elements. The game is based on the director's Omori webcomic series. The game features side quests and puzzles for the player to solve, bestowing them with various rewards and skills upon completion. Outside of battle, the party can heal and save by encountering a picnic blanket, associated with Omori's older sister Mari. Battles are played out in a turn-based format in which each party member performs a move. Characters and enemies have heart, which functions as health points; if damage is taken, it decreases, and if it reaches zero, the character is defeated and turns into toast. Additionally, higher-intensity variants of each emotion also exist. The titular main character, Omori, awakens in the "White Space", a small white room he has lived in "for as long as can remember." He enters a door to the vibrant world of "Headspace", where he meets his older sister Mari and his friends, Aubrey, Kel, Hero, and Basil. Along the way Kel and Aubrey scuffle, damaging the album. When the kids arrive, Basil comes across an unfamiliar photo from the album and panics. He stabs himself with his knife, revealing the previous events to be the dreams of a teenage boy, Sunny. Waking up in bed, the player discovers that Sunny is moving out in three days. 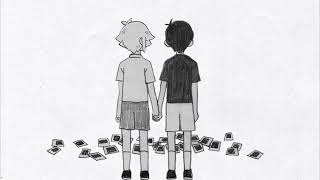