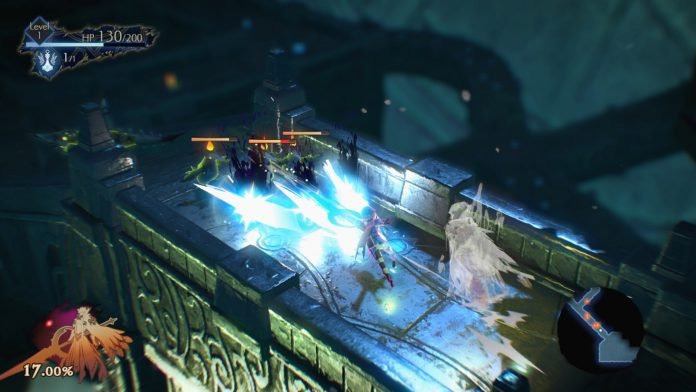 Oninaki is Square Enix studio Tokyo RPG Factory's third game, following I Am Setsuna and Lost Sphear for the PS4, Nintendo Switch, and PC. While the previous two closely followed the concept, gameplay mechanisms, and visuals of 90s role-playing games like earlier Final Fantasy titles and Chrono Trigger, Oninaki takes a new route. It foregoes turn-based combat in favor of real-time action comparable to the Diablo games, as well as anime-inspired graphic style. With a refreshingly gloomy story centered on death and rebirth, Oninaki becomes a wonderfully interesting experience.

You take on the persona of Kagachi, a Watcher. People are not permitted to mourn for the deceased in the realm of Oninaki. The reason for this is that sadness fills the dead with regret, preventing them from being resurrected and turning them into monsters instead. As a Watcher, you're basically a reincarnation immigration officer, travelling between the worlds of spirits and the living to ensure the recently departed make it to the next life.

You'll go to towns, points of interest, and dungeons while alternating between the living and dead worlds. Along the journey, you'll defeat a slew of creatures with ethereal weapons wielded by Daemons, strong souls in your possession. Because of the weapons they employ, each Daemon feels distinct. These include anything from conventional swords to scythes and even chain whips. They're not really unique, but they work in Oninaki's context. Daemons may be upgraded to get additional powers such as flaming strikes that push enemies back and air dashes that can be cancelled in mid-flight.

The battle is mostly entertaining since you may switch between four Daemons at anytime. Although it never appears to match Diablo 3's utter mayhem in terms of opponent quantity, it never seems dull either owing to difficult boss fights with perplexing attack patterns and a diverse range of adversaries. While all Daemons are responsive to control and enjoyable to employ, they each have their individual backstories that you will discover as the game continues. Unlocking slivers of their personal histories, from a princess who runs away with her fiancÃ© to a virtuous soldier, is just as rewarding as the main plot itself.

In that regard, Oninaki's plot is remarkably sophisticated, dealing with subjects like as the afterlife and death with complexity and depth that other games lack. It's never preachy or overwhelming, and it's the highlight of the game's 20-hour runtime.

Having said that, there are several aspects of Oninaki that might use more explanation. You'll notice that moving between worlds makes certain boss fights simpler because your teammates can heal you in one but not the other. So, if you're having trouble with a boss, you might choose to switch to the land of the dead.

And, despite Oninaki's several endings, they all feel fairly sudden and could have used more screen time to describe the events more clearly. When compared to previous Tokyo RPG Factory games, the soundtrack is also unmemorable. These are some weird errors that stand out even more when the rest of Oninaki is as entertaining as it is.

There are further issues. For one thing, the Nintendo Switch version of Oninaki has a lot of lag in cities and non-combat areas, and there's a significant wait while moving between worlds. These remained in both docked and portable modes. Although the remainder of Oninaki plays smoothly, these technological difficulties prevent it from running as smoothly as the PC or PS4 versions. Unless you absolutely must play Oninaki on the go, you should go for the PS4 or PC versions.

While technical difficulties render the Nintendo Switch port less than its better-specced counterparts, it never becomes unplayable. Overall, Oninaki is a wonderful yet imperfect action role-playing game that lovers of the genre or anybody seeking for a great video game tale should check out.

Rate how you feel this post affects Oninaki to change it score. GameSense.co lets you change video game scores by reacting to how you feel posts affect a game.