Backlog
In Oxenfree, players assume the role of the teenage girl Alex on a weekend trip to a local island.
Posts Ratings Similar List ⋮

In Oxenfree, players assume the role of the teenage girl Alex on a weekend trip to a local island. After seemingly supernatural events occur, Alex and her friends must unravel the secrets of the island. The game is Night School Studio's debut. Influenced by classic teen films and coming-of-age shows, the developers wanted to create a story-driven game without cutscenes, allowing players to roam the environment freely. After accidentally unleashing a paranormal force on the island, Alex and company must figure out what the force is and how to stop it. Gameplay is built around the "walk and talk" mechanic: instead of dialogue occurring during cutscenes, speech bubbles appear over Alex's head, giving the player a choice between two or three dialogue options. At the same time, Alex remains free to move around and navigate the game world. Certain dialogue options cause a thought bubble with Alex inside it to appear over characters' heads, suggesting that the player's choice had an effect on the characters' relationship. Objects that can be interacted with in the game world display a small circle next to them. Puzzles in the game are solved by finding the correct frequency on Alex's handheld radio, which can perform actions such as unlocking doors or communicating with ghosts, or by winding up tape recorders at the correct speed.Oxenfree does not have any "game over" loss conditions; the player's choices and relationships with the characters determine which of several possible endings the player receives. Alex , a teenager, is on the last ferry heading to the fictional Edwards Island for a weekend party. On the island, Alex and company meet Clarissa , the ex-girlfriend of Alex's deceased brother Michael, and Nona , Clarissa's best friend and Ren's love interest. Ren explains the island was once a military base and that the island's only permanent resident, Maggie Adler, has recently died. In a small cavern, Alex tunes her radio to a floating shape and unexpectedly forms a dimensional rift. 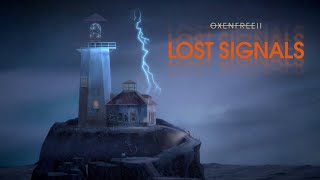