They have basic and powerful strikes, as well as the ability to dodge attacks but also to block them. The player's stamina bar empties as they move and use their abilities. Souldiers leads players to uncover the mysteries surrounding their supposed deaths and those of their fellow soldiers. Whether they choose to play the archer, the scout or the caster, their mission is to find their way through the depths of the mystery and locate the Guardian in Terragaya to move on to the next world. The exploration options are limited by the character's abilities. As the character levels up, they can then unlock new and unique abilities in a skill tree. This allows them to adapt their gameplay to their preferences. It is possible to consult the game's map at any time, and it is uncovered progressively as the player explores. Souldiers takes place at the beginning of a war against the Dadelm army. The Royal Council of Zarga, one of the three nations that rule the continent of Ascil, is preparing its military plan. The War Council led by the King of Zarga announces the positioning of the troops determined by General Brigard. Arkzel, the king's sorcerer and main advisor, who has led him to victory on many occasions, suggests a change of strategy that leads the troop of soldiers to the edge of a cave. It is a Valkyrie, an entity that comes to find the deceased so that their existence continues beyond the world. The player, upon choosing their class, wakes up in Terragaya, a world caught between the dead and the living. The game was announced on October 20, 2021 in partnership with IGN.Souldiers was also featured in the MIX NEXT showcase 2021 with a commented trailer by the developers introducing the gameplay and classes of the game. 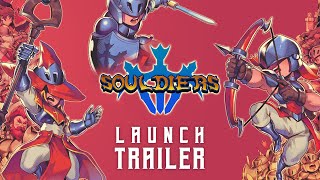 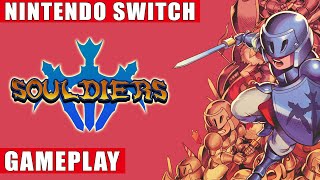 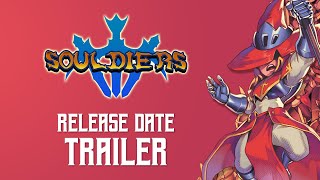