The player must guide the eponymous Spark through a series of differently themed levels, each typically containing an assortment of obstacles, robotic enemies, and boss fights. Base traversal abilities consist of a jump, wall jump, and a dash to accelerate forward. Spark is capable of attacking enemies both aground and aerially, and can chain up to three attacks at a time. Dealing attacks in quick succession will prompt a blue meter, referred to as the "Static Bar", to appear on screen. If Spark takes damage with no hit points remaining, he will die and return to the last checkpoint reached, at which progress is saved, with the meter reset. Other differences consist of fewer hit points, the omission of power-ups, additional boss fights, and a new moveset. Beside attacking, Fark is also able to double jump, dash, and accelerate downwards while airborne, and is capable of walking on walls and ceilings. If half-full, the Static Bar can be expended for health replenishment and a temporary invincibility state accompanied by increased speed and strength. Taking damage will deplete the bar, causing Fark to revert to his normal state. Upon completion of their respective campaigns, the player can revisit levels as either Spark or Fark through a time attack mode, with their fastest finishing time recorded in the game's menu. Two additional game modes can be unlocked. The story begins with Spark, a yellow anthropomorphic character apart of the fictional Formie species, explaining his origins to the player. 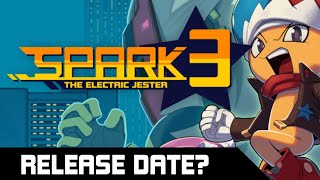 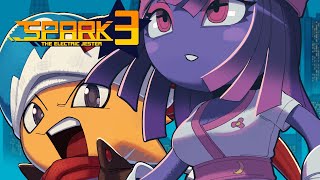