Star Fox Adventures is an action-adventure video game developed by Rare and published by Nintendo for the GameCube as part of the Star Fox series. The plot centers on Dinosaur Planet of the Lylat System, where Fox McCloud is dispatched by General Pepper to restore the planet after pieces of it have broken off and pose a risk to the System. Notable topics of praise included its detailed graphics, new character design for Fox, dynamic environments and The Legend of Zelda-influenced gameplay. Star Fox Adventures is a 3D action-adventure game with platforming elements. Unlike other Star Fox games in which most of the player's time is spent in air combat, playable protagonist Fox McCloud is on foot for most of the game. He pilots his Arwing aircraft only to reach other parts of the planet, although the game includes a few space battles involving the Arwing. The game's combat system is melee-orientated, as General Pepper forbids Fox from using any sort of blaster, telling him "This mission is about saving the planet, not blowing it up!" Fox instead relies on a magical staff belonging to a native named Krystal that he discovered on the planet. Major additions are a quiet, mysterious blue fox named Krystal and the small dinosaur Prince Tricky, Fox's helper during the game. 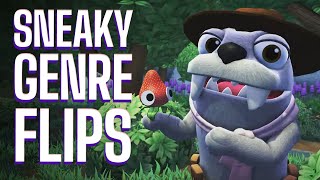