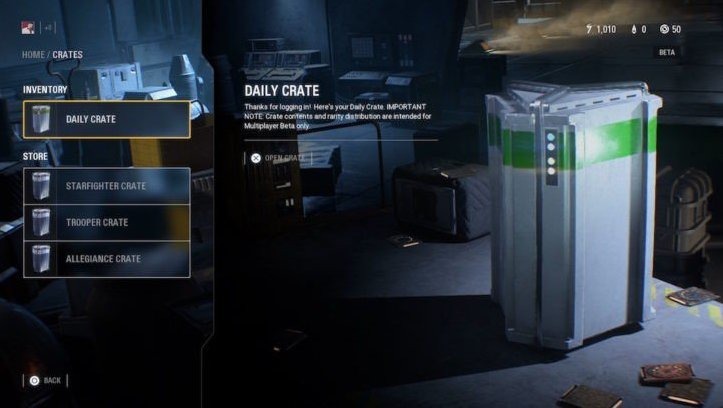 EA deployed an update for Star Wars Battlefront 2 that includes a number of favorable enhancements for players. The blog post that accompanies the update also makes it clear that these changes represent the initial first steps, with a lot more coming over the weeks and months. After a match ends, players will see an overall increase in the number of credits earned. While specific numbers werenâ€™t provided, all players should see a decent increase in post-game rewards, though top players will receive an additional buff as well.

Arcade mode has been a source of contention once players found out that a credit limit prevents players from using the system to earn easy credits. As players continued to hit the credit cap faster than DICE assumed, the developer has increased the limit to 1500 credits per day, up from only 500. The post also revealed that the company is looking to deliver more content in this mode sometime in the future.

Lastly, Daily Login Crates will offer players more crafting parts than before. This was done largely to empower players to use those items to craft stronger cards rather than forcing players to rely on randomized cards purchased from scavenger crates with in-game credits.

This seems like a huge step in the right direction, but I'm skeptical. EA already lowered the cost of in game purchases, but they also lowered how much you earn, keeping the ratio the same. I'm curious to see if they're actually going to fix the game, or if they'll continue to pretend to make the game better, when actually doing nothing.
Read More @ gamerant.com