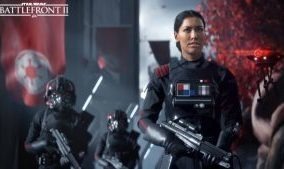 EA and DICEâ€™s Star Wars Battlefront 2 has received a brand new update. The big headlining feature in this update, at least for most players, will be the ability to play on the Crait map in the Blast Game mode. Crait, of course, is the salt mines planet that is prominently featured in the new Star Wars movie (and donâ€™t cry about spoilers, it was literally in the trailers).

I'm glad to see EA at least try and salvage this game. It had so much potential and they blew most of this game with pure greed.

Weâ€™re expanding the ways you can play on Crait by bringing this map to the Blast Game Mode! Battle in the mines among the machinery and crystals leftover from the previous occupants.

Now available as a new Hero Starfighter in multiplayer matches! Iden Versio leads by example from her personal TIE/ln fighter. Custom-built for Inferno Squad, this modified TIE has seen heroic service in the name of the Emperor.

Reduced the heat generated per shot of her F-11D