Star Wars Jedi Knight: Jedi Academy is a 2003 first- and third-person shooter action video game set in the Star Wars universe. In single-player mode, the player takes control of the character Jaden Korr, a student at the Jedi Academy under the tutelage of Kyle Katarn. As a first and third-person shooter set in the Star Wars expanded universe, Jedi Academy puts the player into combat wielding a variety of firearms from that universe, as well as lightsabers and Force powers. In both single-player and multiplayer, the player character is a Force-user, who has access to a variety of Force powers in addition to their lightsaber. The player can create a custom lightsaber by selecting a hilt and one of five blade colors. Later in the game, the player can choose to wield a single saber, one saber in each hand, or a "saber staff" similar to the double ended lightsaber Darth Maul used in The Phantom Menace which also adds a kicking ability unavailable with any other lightsaber. The player is only required to complete four of the missions before advancing, although the option is available to complete all five. Between missions the player can choose one of their force skills to upgrade. 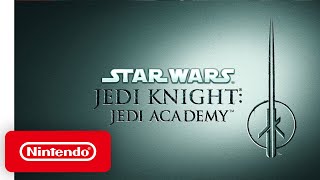