ToeJam & Earl's design was heavily influenced by the role-playing video game Rogue, and took from it such features as the random generation of levels and items. ToeJam & Earl was followed by two sequels: ToeJam & Earl in Panic on Funkotron and ToeJam & Earl III: Mission to Earth, released for the Mega Drive and Xbox, respectively. ToeJam & Earl has been called a surreal, comic satire, and a "daringly misanthropic commentary on Earthly life". ToeJam is red and has three legs. He says that they must find the widely scattered pieces of their spacecraft's wreckage to return to their home planet, Funkotron. The player guides the characters as they avoid Earth's antagonistic inhabitants and search for the debris. Should the player succeed, the final sequence depicts ToeJam and Earl escaping the planet in their reconstructed spacecraft. Its gameplay mechanics were inspired by Rogue, which has led to its description as a Roguelike or dungeon-crawl game. The game contains both single-player and two-player cooperative modes. They are connected by elevators. 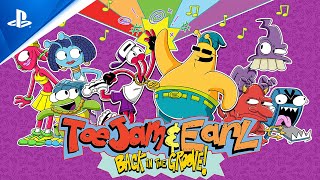