Under Night In-Birth is a visual novel and 2D fighting game co-developed by Ecole Software and French-Bread, known for the Melty Blood series. It features a brand new cast of characters and a story that spins around modern fantasy. Sega released the arcade version in Japan on September 20, 2012. A major revision of the arcade version, entitled Under Night In-Birth Exe:Late, was released on September 9, 2013. It was announced by Famitsu that Arc System Works would release the game for PlayStation 3 on July 24, 2014 in Japan. A 2015 release for North America and Europe was later announced. The North American release date, which is set for March 31, 2015, was revealed on the GameStop website. However, Aksys Games revealed the true release date for the upcoming fighter Under Night In-Birth Exe:Late, they said that the game will be releasing on February 24, 2015 for the PlayStation 3, as well as confirmed there won't be an English dub in Western releases. Under Night In-Birth Exe:Late was released on Steam for Microsoft Windows systems on July 12, 2016. 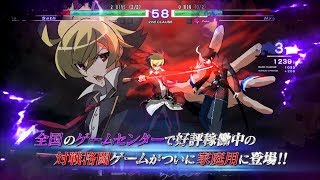