Voice Of Cards: The Beasts Of Burden

Voice of Cards: The Forsaken Maiden is a 2022 role-playing video game developed by Alim and published by Square Enix for PlayStation 4, Nintendo Switch and Microsoft Windows. Using the aesthetic of a tabletop role-playing game, the player controls a young man who escorts a magical maiden on her quest to collect relics and protect their home from destruction. Reception was generally positive, with critics noting improvements to the story over the first Voice of Cards in addition to the artwork and narrative, but noting a lack of innovation in its gameplay. Much of the game uses a linear structure, with only the last two island narratives able to be tackled in any order. In towns, players can engage in a card-based minigame, with the aim being to match card types and scores while working with or around random card effects, with the winner having the highest score. Battles play out through both scripted and random encounters with a party of four controlled by the player; protagonists Barren and Laty, and two other characters dictated by the storyline. Upon winning, the party is awarded with gold and experience points, with leveling up raising a character's health and attributes. On Omega Isle, which is destined to be destroyed since it has no Maiden to safeguard its guardian spirit, protagonist Barren builds a boat to sail the ocean and looks after Laty, a mute girl who was found by him on the shore. Going to Omega Isle's shrine with her, they are met by the spirit Lac, who reveals Laty was meant to be Omega Isle's Maiden but failed and must now find four other Maidens and acquire relics from them to prevent Omega Isle's destruction. With each Maiden and attendant encountered, Barren and Laty work to heal scars on Laty's heart in the Heart's Domain, source of human emotion. Each Maiden has their own arc. The Azure Maiden Phia completes her passage and sacrifices herself to preserve the Island, then her attendant Hyd reveals his hatred for her as he was forced to be her lover. The Crimson Maiden L'via and her attendant Gladio must fight in an arena to win the respect of their people, with L'via dressing as a boy to accomplish this. 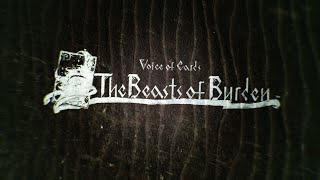 User Posts For: Voice of Cards: The Beasts of Burden