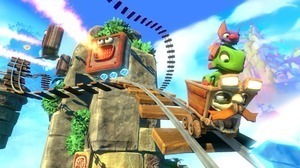 Yooka-Laylee Hands-On Preview - Welcome Back To The N64 Era

0
Back in May 2015, Playtonic Games revealed their latest game: Yooka-Laylee. The game was being billed as the spiritual successor to Rare’s Banjo-Kazooie. How could Playtonic attempt to take over from Rare? Well, it helps that Playtonic is made up of a group of several former key Rare employees, employees that just so happened to create Banjo-Kazooie during the Nintendo 64 era. Sporting a bright, colorful world as well as a wacky duo in Yooka (a male chameleon) and Laylee (a female bat), Yooka-Laylee looks like the type of game we’ve been sorely lacking for some time. If you’ve been craving a 3D platformer, there aren’t many developers who will be able to make a better game than the veterans behind Donkey Kong Country and Banjo-Kazooie.
Read More @ wccftech.com